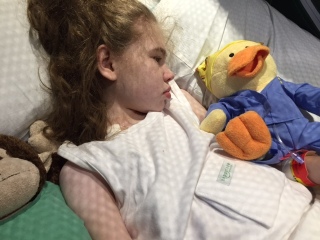 Last week Child Life sat with Graham and while using a special doll with a port they helped explain Grace’s port surgery. Graham was able to push medicine (water) in through the port and then drawn back blood (it turned red). He’s talked about it a few times since then but the best part was that someone was focused on him explaining something about his sister.

Child Life stopped by yesterday with a Chemo Duck (ports are used frequently with chemotherapy) which is a stuffed duck in scrubs with a port, it’s not as fancy as the one Child Life used with him but it has two places the port can be attached. I took it home last night and he loved it and named it Duck; he even took it to bed with the port attached. He asked if Grace got one too and I said that the duck was just for him. He thought that was pretty cool and said that he would share his duck with Grace. Sure enough, this morning he had his duck with him on the way to daycare and he left it with me to take to Grace for the day. Tonight when Joy picked him up he was ready to have his duck back so they had to make the trek back to the hospital to pick it up!

Grace continues to make progress she has been tolerating her normal feeding volumes spread out over two hours. On Wednesday we shorten the time frame to one hour. As long as the plan stays on schedule she should be discharged on Friday. We had an x-ray last night which confirmed no further occlusions or blockages.

Joy discovered today that Grace was 44oz of daily free water short after IV nutrition (TPN) was stopped yesterday. The TPN provided her with needed nutrition but also accounted for her hydration needs. Unfortunately, there was not good communication between the dietician and the general peds resident.  Thankfully the managing doctor and resident from the PICU are keeping an eye on Grace. Joy got the PICU resident working on a plan, and she was happy to do so. Hydration is essential to all of us but for Grace a lack of fluids can lead to constipation which we desperately need to avoid right now.

Grace got out a bit more from the room on some wheelchair rides, she continues to look more and more alert and active each day.