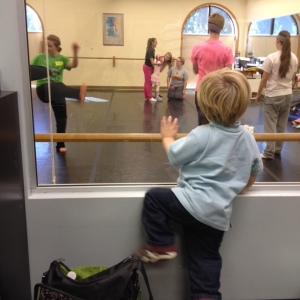 “Gracie walk” he said as he took her hand- and they took a few steps together before she started to trip.  Graham did this.  Graham, our not quite two, continually amazing us, little boy.  I just loved them both so much in that brief moment…it was kind of a normal moment (if you don’t think about it too hard 🙂 )

It’s not the first time he’s included Grace, or tried to help her.  He often tries to share his snacks with her.  He tries to get her to play catch with us, saying “Gracie ball” and tossing it her way.  Often she has no idea it’s coming.   It doesn’t stop him from throwing it to her again.

In the church nursery before we are even there to pick them up Graham gathers up his coat, her coat, and the diaper bag.  He’s not leaving without her.

When we first got the swing set this summer there was a night that he was insisting we go outside and swing.  Kevin wasn’t home yet – it was just the three of us.  I put Grace on a blanket in the yard to watch and went to buckle him in.  “No Gracie” he kept saying and refused to be buckled in.  I put him down and he ran to Grace in the grass, pulled her by the arm and said “Gracie swing”.  I tried to explain to him that they couldn’t both swing, (Grace didn’t have her own swing yet.  She could only swing with me on the porch swing that’s also a part of the swing set.  I couldn’t leave her on the porch swing alone to push him- there’s no way to make sure she’d stay there…not that he could understand any of that.)   He just kept pulling on her arm repeating “Gracie swing”.  Luckily Kevin arrived home, everyone could swing, and Graham was happy.

He claps for her at baseball.

He pounds on the window at dance yelling “Gracie, Gracie” trying to get her attention.

He likes to help when she’s getting meds in the morning.  She’s sleeping and he’s a happy (and loud) morning person.  “Shh, shh” we say and put our fingers to our lips as we go in the room- and then he sees her and says out loud “Gracie!”

It’s a treat to sit in her wheelchair.

You should see it when he hugs her good night – so precious!  He lays his cheek on top of her helmet, his little arm on her back.

We have to be careful though, one night Grace had a seizure (a pretty hard one) and Kevin and I both jumped up to get to her.  Graham began to cry, his little face just fell, “Gracie” he cried…and in that one word were so many questions… Is she ok?  Why did you jump up?  Am I ok?  Are we still ok? Why am I scared?  I picked him up, dried the tears and told him she was ok, he was ok, and we were going to be ok.

Grace for her part acknowledges Graham.  They fight for toys – and a lot of times want the same thing.  She chews on Graham’s Elmo’s doll.  She also reaches for him.  Pats him.  Sits next to him.  And she endures the hugs quite willingly.

It really feels like there is something between them I can’t capture in words.  I know it won’t always be exactly like this, so I knew I had to try.

And because I haven’t said it in awhile I just feel the need to say again, “normal” development is amazing and its amazing-ness just continues to astound me.